This Easter week, you’ve probably reflected on the most central story of Christianity: Jesus dying on the cross and rising from the dead. The greatest gift ever offered. A few parallel stories, some of my favorites in the Bible, are also about gifts. Sometimes I forget how close in timing and proximity they are to the main action.

These secondary stories increase the tension as it moves toward its climactic crescendo, in the same way that the grand finale brings an exclamation point to a spectacular fireworks show. Parallel Story #1:  The Gift that Cost a Lot

I’ve long been interested in the three siblings–Martha, Mary, and Lazarus–whose home Jesus frequently stayed in, partly because they are a non-traditional family, with all three being unmarried. But mostly, I love them because Jesus seemed to enjoy being with them. Their house is in Bethany, less than two miles from Jerusalem, so it’s an easy walk that Jesus takes often.

Not much time elapsed between one of the most miraculous events of Jesus’ ministry and the beginning of Holy Week. His friend Lazarus dies, Jesus waits four days to come to Lazarus’s sisters, and when he does, he raises Lazarus from the dead. It’s because of this event, and the large number who witnessed it (made larger since he waited four days), that the plot to kill Jesus intensifies.

In the account of this story, found in John 11, Jesus says something which the crowd gathered there probably remembered, and puzzled over, in the weeks to come.

In fact, after seeing him call Lazarus forth out of his tomb-grave, I wonder if some among them tried to grab on to a sliver of hope that Jesus would do the same for himself. Did they have even a mustard seed of faith that Jesus might never die?

Soon after bringing Lazarus back to life, just six days before Passover (according to John 12), Jesus goes back to Bethany to visit the siblings. During this visit, Mary breaks open the vial of extravagant perfume and pours it on Jesus’s feet, thereby anointing him for his burial. Mary chose worship over duty.

For context, Mary’s the sister who earlier chose the one necessary thing, to sit at the Lord’s feet and listen to him, while her sister Martha scurried about checking off her To-Do list (Luke 10:38-42). For you Bible scholars, Jesus was anointed a second time, two days before Passover, by an unnamed woman who poured the perfume from an alabaster jar onto his head (Matthew 26).

Mary gave the most expensive gift she had to give. Once again, Mary chose the important thing over the practical one. She gave, freely and extravagantly, in worship.

Parallel Story #2: The Gift that Cost Everything

Two days after being anointed by Mary in Bethany, Jesus enters Jerusalem on a donkey’s colt, with palm branches waved and “Hosanas” shouted to him.

Jesus spends the night of Palm Sunday in Bethany again with his friends, and the next day, he’s back in Jerusalem. In the temple there, Jesus watches a parade of people showing off their good works by throwing large amounts into the treasury. A poor widow shuffles by and places two copper coins in the offering, worth only a couple cents.

Marginalized and ignored by society, she was accustomed to being overlooked. But Jesus sees her. He commends her for giving everything she had to give.

In his last few days on earth, Jesus makes sure that we have a lasting example for how to give:  generously. The widow gave without knowing where her next meal would come from. She didn’t give to earn a plaque with her name engraved on it–we don’t even know what it is–or to join the Jerusalem Society of Major Donors.

And yet her faith earned her a spot in Scripture. She gave from her heart. The widow gave less than anyone else, but she gave it all. She gave in faith.

The Central Story: The Gift that was Enough

The rapid-fire barrage of stories leads to the grand finale. They culminate in the cross, with the Gift above all Gifts.

God gave the most precious thing he had to give: His Son. God had it in his heart from the beginning to sacrifice his only and much-loved son, all because of his love for us. It’s the reason he sent his son to live among us. It cost God a lot.

For God so loved the world that he gave his one and only Son, that whoever believes in him shall not perish but have eternal life.            John 3:16 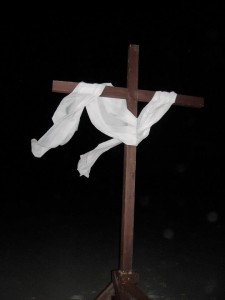 Jesus gave all he had to give: His life. Jesus’s life was never taken from him. He wasn’t murdered. He willingly gave up his life. He gave it up for us. He gave everything.

Jesus gave enough. He completed the work he was sent to do. Nothing more was needed; the penalty for our sin was satisfied. On the cross, with his dying breath, he said, “It is finished.”

Three days later, He was alive. He rose, victorious over death. And because of that, we can live and never die.